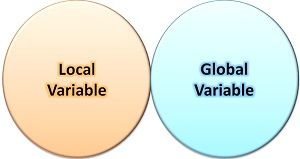 As we discussed earlier, a variable is a name, given to a memory location, and it must be declared before it is used. In C, all the variables are declared at the starting of the program. In C++, variables can be declared, at any point of time, before they are used in the instructions.

Let’s study some more differences between a local and a global variable along with a comparison chart.

The reason behind it is that the local variables are stored on the stack unless their special storage is specified. The stack is dynamic in nature, and the change in memory location leads to the reason why the local variable doesn’t hold their value as soon as the block of a function exists.

Note:
However, there is a way to retain the value of a local variable by using the ‘static’ modifier.

They remain in existence until the whole program gets executed completely. Global variables retain their values until the program is in execution. The reason is that they are stored on a fixed region of memory, decided by the compiler.

A Global variable is helpful in situations where multiple functions are accessing the same data. Using a large number of global variables might be problematic, as there may be unwanted changes to the value of a global variable.