Sorting is a basic operation in which the elements of an array is arranged in some specific order to enhance its searchability. In simple words, the data is sorted so that it could be easily searched.

Insertion sort works by inserting the set of values in the existing sorted file. It constructs the sorted array by inserting a single element at a time. This process continues until whole array is sorted in some order. The primary concept behind insertion sort is to insert each item into its appropriate place in the final list. The insertion sort method saves an effective amount of memory.

Working of the Insertion sort 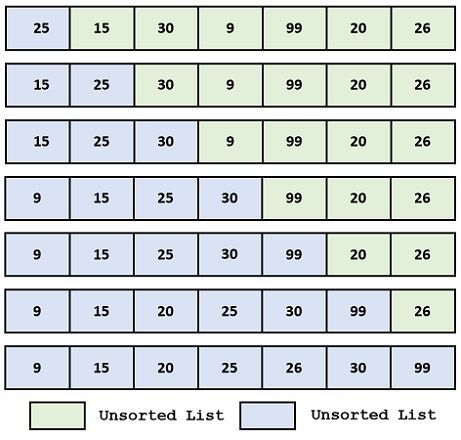 Working of the Selection Sort 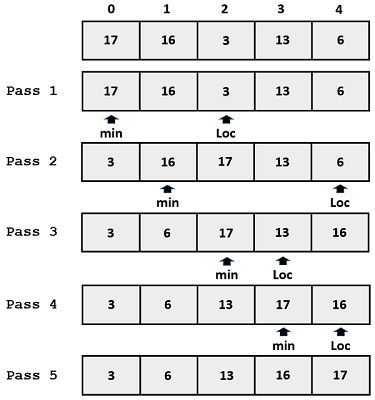 The best case complexity of insertion sort is O(n) times, i.e. when the array is previously sorted. In the same way, when the array is sorted in reverse order, the first element of the unsorted array is to be compared with each element in the sorted set. So, in the worst case, running time of Insertion sort is quadratic, i.e., O(n2). In average case also it has to make the minimum (k-1)/2 comparisons. Hence, the average case also has quadratic running time O(n2).

Complexity of the Selection Sort

As the working of selection, sort does not depend on the original order of the elements in the array, so there is not much difference between best case and worst case complexity of selection sort.

The selection sort selects the minimum value element, in the selection process all the ‘n’ number of elements are scanned; therefore n-1 comparisons are made in the first pass. Then, the elements are interchanged. Similarly in the second pass also to find the second smallest element we require scanning of rest n-1 elements and the process is continued till the whole array sorted.

Among both of the sorting algorithm, the insertion sort is fast, efficient, stable while selection sort only works efficiently when the small set of elements is involved or the list is partially previously sorted. The number of comparisons made by selection sort is greater than the movements performed whereas in insertion sort the number of times an element is moved or swapped is greater than the comparisons made.