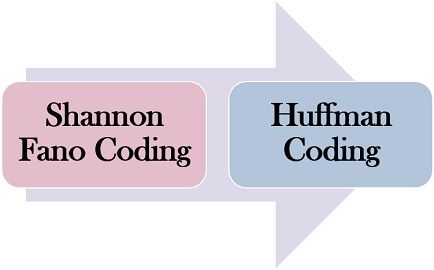 The main intent of the communication system is to transfer the messages from a sender to the receiver. In this process, the signal used to transmit the information should be accordant with the properties of the transmission channel. The information coding is used to transform the message into the signal, i.e., signal information encoding where the message is encoded into codes. The prior difference between the Huffman coding and Shannon fano coding is that the Huffman coding suggests a variable length encoding. Conversely, in Shannon fano coding the codeword length must satisfy the Kraft inequality where the length of the codeword is limited to the prefix code. This can be explained by the example in which if the length of each valid codeword is taken in exponential form then the resulting group of values should appear like a probability mass function.

Here the prefix code means the code in which no codeword forms the prefix of any other codeword.

Huffman coding is a compression algorithm that handles the data compression of ASCII characters. In this algorithm the Huffman codes which are not mandatory with prefix codes and generated from a group of probabilities. It was designed by David Huffman when he was studying at MIT in 1952 in the field of information theory. The algorithm is based on the top-down approach where a binary tree is created in a top-down fashion to generate a minimal sequence.

It works by translating the characters contained in a data file into a binary code. However, the major characters in the file have the smallest binary code, and the least occurring characters have the longest binary codes. It is a prevalently used method for lossless text compression where the compressed data can be restored in its original format.

Now, let us understand the algorithm with the help of some steps:

Similar to Huffman coding the Shannon Fano algorithm used to create a uniquely decodable code. It was developed earlier than the Huffman coding algorithm by Claude Shannon and Robert Fano in the year of 1949. This technique also uses the probabilities of the data to encode it. Although, it does not ensures the optimal code generation. It is considered as the technique of constructing prefix codes in accordance with the group of symbols and probabilities.

Here the steps are given for interpretation of the algorithm:

Among both of the encoding methods, the Huffman coding is more efficient and optimal than the Shannon fano coding.