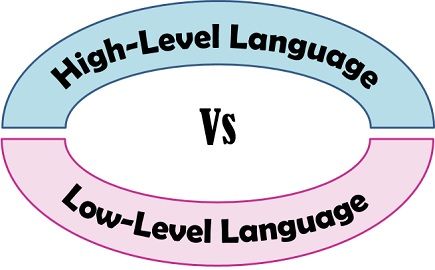 To get an idea about the high-level language, let’s take an example of online shopping. When a user wants to buy something online he/she selects the items and add it to the cart to buy it, then chooses for payment methods. Payment methods include net banking, debit card, credit card or (COD) cash on delivery. The details of the account holder are checked and verified against the bank’s database in the payment gateway. At last, the transaction takes place and the order is placed which is delivered within a few days.

The above activity can be interpreted in a high-level programming language in a below-given manner:

Machine Language is considered as the computer’s natural language, which can be directly recognized by the electronic machines. It is a non-portable and machine dependent language which consist of only two binary numbers 0’s and 1’s. Each instruction in a computer exists in the form of binary code. However, it is quite hard to give instructions to a computer in a binary language which means to interact with a computer in a binary language or writing programs in machine level language. The writing, testing and debugging speed in machine language is slow and incautious errors are very common. The machine language is defined by the hardware design of that hardware platform. It is tiresome and time-consuming.

Another variant of low-level language is assembly language. In this language programmers uses commands which slightly resembles to common English that is understandable to some extent and interpreted by programmers. Programs are constructed using alphanumeric symbols (also known as mnemonics) instead of 0’s and 1’s. It includes ADD, SUB, MUL, DIV, RLC and RAL as the symbols or mnemonics.

The low-level languages are mainly used to construct less operational application where simple and specific functions are required such as CNC machine, electronic devices etcetera. On the other hand, high-level languages are used to build operation extensive applications where a long sequence of functions are carried out like softwares used in hospitals, industries and factories etcetera.