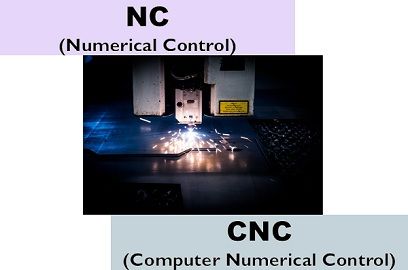 The NC (Numeric Control) and CNC (Computer Numeric Control) are the systems implemented with the various machining tools in the various industries and factories. These Controls mainly differentiated by the fact that NC is the traditional control which allows the use of prerecorded information in the machining process. In contrast, CNC goes one step further by providing more flexibility and capability. CNC’s are capable of handling the logical functions.

The advancement in technology provided ways to produce an entity in bulk in an automated manner, and this was useful for the large scale industries. The mass production units in these industries use automatic machines or transfer lines and special purpose machines as the amount of the item needed is huge without any variation.

However, in the case where the different variety of components are needed to be produced along with the discontinuous requirement of the products (i.e., for job or batch production), the general-purpose machines are used. These traditional general-purpose machines require a skilled operator for giving the inputs to the machines. The work of an operator is not only handling the machine but also processing the information like reading drawing and checking dimensions.

While the disadvantage of these general-purpose machines is that their working entirely depends upon the operator. If the operator commits some mistake because of tiredness or inattention, it will result in the production of defective components. This is the reason the NC and CNC’s were developed to reduce the manual control elements.

NC (Numeric Control) systems use fixed logical functions to handle a machine tool or the machining process. NC specifies the control of the machine movements and various different functions with the help of instructions represented as a sequence of numbers. The electronic control systems drive these NC’s. Although, we cannot change the functions in the NC, meaning it is not programmable, due to the rigid wiring of the control logic and it is considered as hardwired.

In order to feed the instructions into the NC machines, the external medium is used, such as paper tape or magnetic tape. It reads the information from this tape processing it steps by step, which is stored in the memory of the control system known as ‘buffer storage’. Therefore, when the machine is operating on a single instruction block, it reads the next block from the tape and saves it in the memory of the machine control system.

The CNC stands for Computer Numerical Control, it is generated by merging the computer with the Numerical control. So, how is it different from the NC systems? It uses internal microprocessors (computers) which are comprised of memory registers. The memory registers stores various routines that can successfully manipulate logical functions. As a result, a machine operator is capable of altering the program on the control itself. This is very advantageous for the CNC machines.

Unlike NC machines, CNC machines stores the programs and logical functions in the special computer chips this is why it is called as softwired.

The supplementary features of the CNC that were not available with the NC machines are:

Key Differences Between NC and CNC

The main distinguishing factor between NC and CNC machines is that the NC uses the punched cards directly for controlling the machine tools. On the other hand, CNC employs computers that interfaces with different MCU’s (Machine Control Units) from which the information flows.