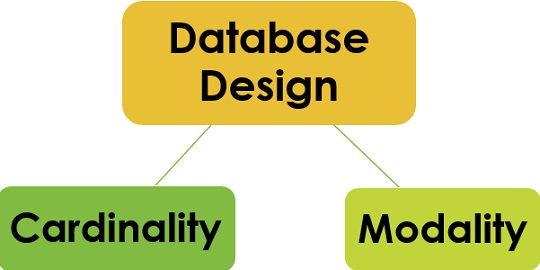 Cardinality and Modality are the two data modelling concepts used for understanding the information domain of the problem. For analysing the data objects, data attributes and relationships structures, the terms given above are very important.

Cardinality describes that a data model must be able to represent the number of occurrences of an object/s in a given relationship. It can be expressed in the pattern of “one” or “many”. In database designing, we usually define a group of objects and represent the object/relationship pairs that bind them. Assuming a simple pair – Object “a” related to object “b” does not provide sufficient information for software engineering purposes. So, to interpret how many occurrences of one object is related to how many occurrences of other objects the cardinality is devised.

Let’s take an example of a bank account having the tables PAN card and debit cardholder, each individual can have a unique PAN card number and on the basis of it, that person could own a single (i.e., one-to-one) or several different accounts in different banks (i.e., one-to-many). For associating two objects, any of the three relations can be made.

The Modality is completely different from the cardinality. Its value is computed as “o” when there is no requirement for the relationship to occur or if the relationship is optional. The modality value is “1” if there is a compulsion for the occurrence of a relationship. In simple words, it describes whether a relationship between two or more entities is even required or not.

So, here if the modality is “0” or more then “0” which specifies the Debit cardholder does not have any PAN card number hence is not needed to be held. Debit card holder table not only maintains the active cardholder data but also the data of users which have closed their bank accounts and this is called NULLABLE column due to its acceptance of an empty field.

When the modality is 1, the debit cardholder must be having a PAN card number, which means a bank account with no PAN card number cannot be included in the table. Therefore this column is considered to be NOT NULL column as it does not accept null values.

Key Differences Between Cardinality and Modality 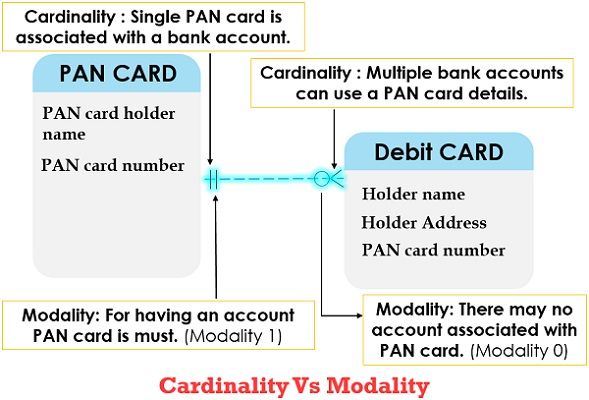