The basic difference between DES and AES is that in DES plaintext block is divided into two halves before the main algorithm starts whereas, in AES the entire block is processed to obtain the ciphertext.

Let us discuss some more differences between DES and AES with the help of the comparison chart shown below.

Data Encryption Standard (DES) is a symmetric key block cipher that was adopted by National Institute of Standard and Technology in the year 1977. DES is based on the Feistel structure where the plaintext is divided into two halves. DES takes input as 64-bit plain text and 56-bit key to produce 64-bit Ciphertext.

In the figure below you can see the encryption of plaintext using DES. Initially, the 64-bit plaintext undergoes initial permutation which rearranges the bits to get 64-bit permuted input. Now this 64 bit permuted input is divided into two halves i.e. 32-bit left portion and 32-bit right portion. Both this portion undergoes sixteen rounds where each round follows the same functions. After completion of sixteen rounds, final permutation is done, and the 64-bit ciphertext is obtained. 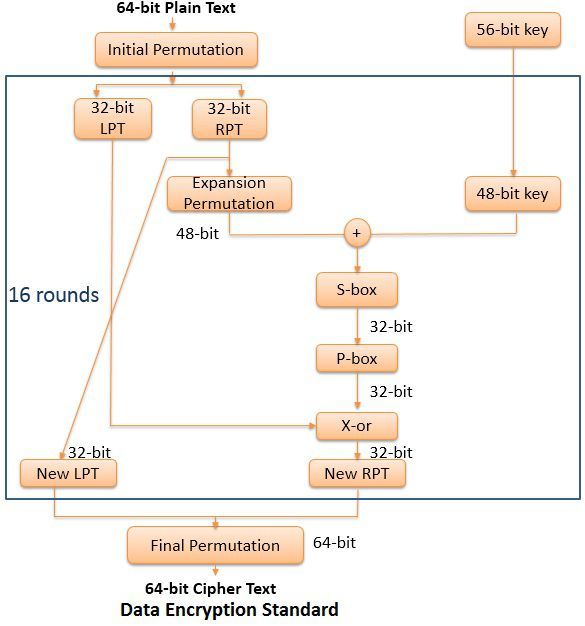 Each round contains following functions:

Advanced Encryption Standard (AES) is also a symmetric key block cipher. AES was published in 2001 by the National Institute of Standards and Technology. AES was introduced to replace DES as DES uses very small cipher key and the algorithm was quite slower. 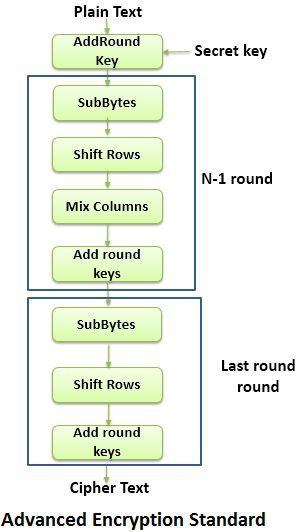 AES algorithm takes 128-bit plaintext and 128-bit secret key which together forms a 128-bit block which is depicted as 4 X 4 square matrix. This 4 X 4 square matrix undergoes an initial transformation. This step is followed by the 10 rounds. Among which 9 round contain following stages:

And the last 10th round involves Subbytes, Shift Rows, and Add round keys stages only and provides 16 bytes (128-bit) ciphertext.

Key Differences Between DES and AES

DES is the older algorithm and AES is the advanced algorithm which is faster and more secure than DES.