Furthermore, a decoder is demultiplexer without data input stream, and it contains inputs instead of select lines. Although when enable is used within a decoder circuit it completely resembles demultiplexer.

The decoder is a combinational logic circuit whose purpose is to decode the information. It is comprised of n number of input lines and 2n number of output lines. In every probable input condition, among the various output signals, only one output signal will produce the logic one. So, this n-to-2n decoder can also said to be min-term generator where each output corresponds to precisely one minterm.

Generally, there are 3 types of line decoders are used that are 2-to-4, 3-to-8 and 4-to-16. The decoder is also used in the detection of the particular group of bits (code) at the input side. It can discern one or more n bit combinations with the help of n-to-2n configuration.

What is the need of a decoder?

Structure of the decoder 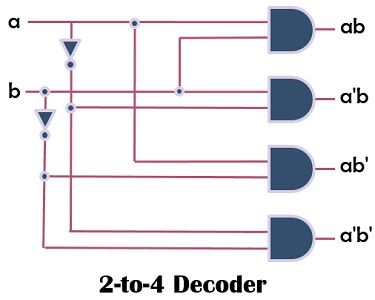 A 2-to-4 decoder with input a and b would contain four AND gates and 2 NOT gate as shown in the diagram. The generated output of the decoder are ab, a’b, ab’ and a’b’, wherein each possible input only one gate could produce “1”(high) as an output. 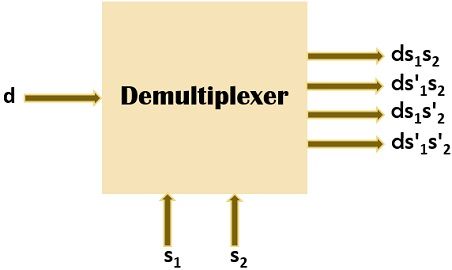 Now, let’s understand the configuration of the basic 1-to-4 DEMUX circuit. So, from the below-given diagram, the data input line is inserted in all of the AND gates. Select lines are intended to make only one gate usable at a time. Therefore, the data visible on the data-input line will only go through the chosen gate to the associated data-output line. 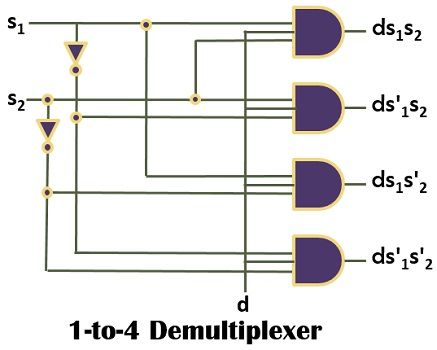 Key Differences Between Decoder and Demultiplexer