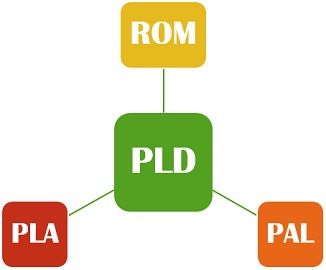 PLA and PAL are types of Programmable Logic Devices (PLD) which are used to design combination logic together with sequential logic. The significant difference between the PLA and PAL is that the PLA consists of the programmable array of AND and OR gates while PAL has the programmable array of AND but a fixed array of OR gate. PLD’s provides a more simple and flexible way of designing the logic circuits where the number of functions can also be increased. These are also implemented in IC.

Before PLD’s, multiplexers were used for designing a combinational logic circuit, these circuits were highly complex and rigid. Then Programmable logic devices (PLD) are developed, and the first PLD was ROM. ROM design was not very successful as it emerged the issue of hardware wastage and increasing exponential growth in the hardware for every large application. To overcome the limitations of ROM, PLA and PAL were devised. PLA and PAL are programmable and effectively utilizes the hardware.

PLA stands for the Programmable Logic Array which presents the boolean function in the SOP (Sum of Products) form. The PLA contains NOT, AND and OR gates fabricated on the chip. It passes every input by a NOT gate which makes each input and its complement available to every AND gate. The output of each AND gate is given to the each OR gate. At last, the OR gate output produces chip output. So, this is how suitable connections are made to employ SOP expressions. 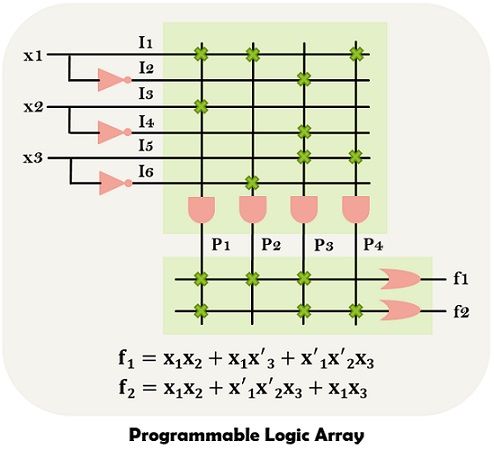 In PLA the connections to both AND and OR arrays are programmable. PLA is considered more expensive and complex as compared to the PAL. The two different manufacturing techniques can be used for PLA to increase the ease of programming. In this technique, each connection is built through a fuse at every intersection point where the unwanted connections can be removed by blowing the fuses. The latter technique involves the connection making at the time of the fabrication process with the help of the proper mask provided for the specific interconnection pattern.

PAL (Programmable Array Logic) is also a PLD (Programmable Logic Device) circuit which works similar to the PLA. PAL employs the programmable AND gates but fixed OR gates, unlike PLA. It implements two simple functions where the number of linked AND gates to each OR gate specifies the maximum number of product terms that can be generated in a sum-of-products representation of the particular function. While the AND gates are perpetually connected to the OR gates, which signifies that the produced product term is not shareable with the output functions. 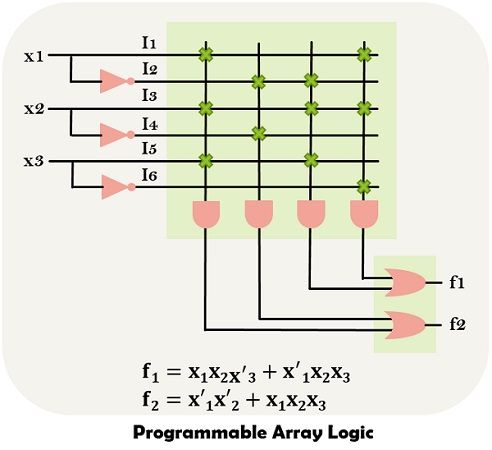 The main concept behind developing PLD’s is to embed a complex boolean logic into a single chip. Therefore, eliminating the unreliable wiring, preventing the logic design and minimizing power consumption.

Key Differences Between PLA and PAL