A compiler is a translator which transforms source language (high-level language) into object language (machine language). In contrast with a compiler, an interpreter is a program which imitates the execution of programs written in a source language. Another difference between Compiler and interpreter is that Compiler converts the whole program in one go on the other hand Interpreter converts the program by taking a single line at a time.

Evidently, the perceivability of humans and an electronic device like a computer is different. Humans can understand anything through natural languages, but a computer doesn’t. The computer needs a translator to convert the languages written in the human-readable form to the computer-readable form.

A compiler is a program that reads a program written in the high-level language and converts it into the machine or low-level language and reports the errors present in the program. It converts the entire source code in one go or could take multiple passes to do so, but at last, the user gets the compiled code which is ready to execute.

Compiler operates on phases; various stages can be grouped into two parts that are:

Now let’s understand the working of each stage in detail. 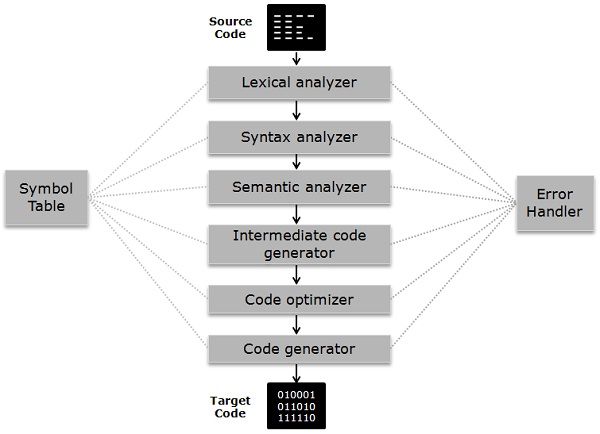 The symbol table is somewhat a data structure which manages the identifiers along with the relevant type of data it is storing. Error Handler detect, report, correct the errors encountering in between the different phases of a compiler.

The interpreter is an alternative for implementing a programming language and does the same work as a compiler. Interpreter performs lexing, parsing and type checking similar to a compiler. But interpreter processes syntax tree directly to access expressions and execute statement rather than generating code from the syntax tree.

An interpreter may require processing the same syntax tree more than once that is the reason why interpretation is comparatively slower than executing the compiled program.

Compilation and interpretation probably combined to implement a programming language. In which a compiler generates intermediate-level code then the code is interpreted rather than compiled to machine code.

Employing an interpreter is advantageous during program development, where the most important part is to be able to test a program modification rapidly rather than run the program efficiently.

Key Differences Between Compiler and Interpreter

Let’s look at major differences between Compiler and Interpreter.

Compiler and interpreter both are intended to do the same work but differ in operating procedure, Compiler takes source code in an aggregated way whereas Interpreter takes constituent parts of source code, i.e., statement by statement.

Although both compiler and interpreter have certain advantages and disadvantages like Interpreted languages are considered as cross-platform, i.e., the code is portable. It also doesn’t need to compile instruction previously unlike compiler which is time-saving. Compiled languages are faster regarding the compilation process.