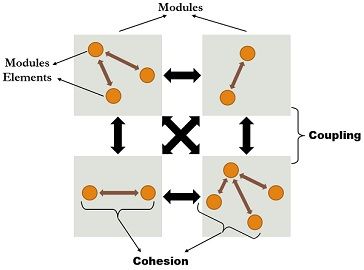 Cohesion and coupling are used as the categorisation method to specify the interactions within and between the software components. We know that software could contain thousands of lines of code or even more than that, which could result in an unanticipated increase in the code complexity. To stabilize the code complexity, the concept of modularisation is introduced. The modularization is the method of splitting the software into smaller isolated pieces known as modules.

Cohesion is the enhancement in the concept of information hiding, which describes that the modules must be specified and designed in such a manner that the other modules can not access the information contained within the modules.

In the software design, the lowest amount of coupling should be employed. Simple connections are used among the modules to make the software easy to understand and free from the ripple effect. Ripple effect is nothing but the propagation of the errors from one to another throughout the system.

Key Differences Between Cohesion and Coupling

Cohesion is a quantitative implication of the degree to which a module concentrates on just a thing. On the other hand, the coupling is a qualitative implication of the level to which a module is linked to other modules and the external world. In an ideal case for achieving better modularity and functional independence, the number of interactions between the modules (Coupling) must be low while the interaction within the modules (Cohesion) should be higher in extent.