The major difference between link and association is that link is a physical or theoretical connection between the objects whereas association is a group of links with same structure and semantics. Associations are implemented in programming languages as a reference model in which one object is referenced from the another. While links cannot be referenced as these are not objects by itself, but rely on the objects.

The link and association are mostly used in UML designing which can be seen as the principle of software engineering. UML designing helps in understanding and minimizing the dependencies among various design elements.

The logical or physical connection among objects is referred to as link. These links are used to relate multiple objects and represent a relationship between objects. We can not reference links, because a link is not a component of either object by its own but do rely on the objects. 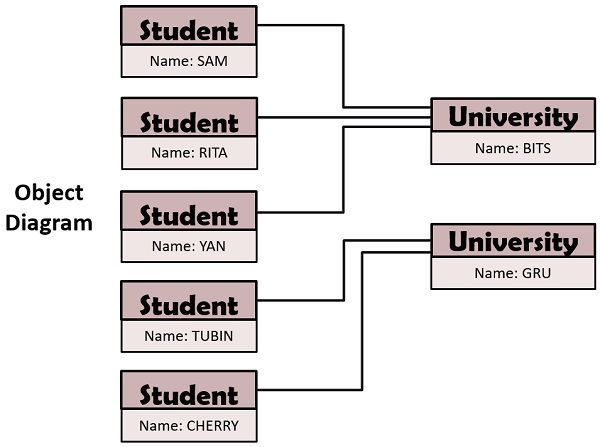 The links in the above example represent the relationship between the different objects. The links can be of three types – One-to-one, one-to-many, many-to-many.

A collection of links is specified by an association which have common structure and semantics. Association is essentially bidirectional. As the class describes the potential objects, in the similar fashion an association represents a group of possible links.

The association among the alike classes is created by the collection of links among the objects. Let’s take an example, a student X studies at Z university. In the above example “studies in” is a link between student and university class. The various kinds of Association are unary, binary, ternary, quaternary, and higher order association.

Key Differences Between Link and Association

Link and association are the ways to construct the relationship between objects and classes. Links corresponds to the objects while association has a relation with class.