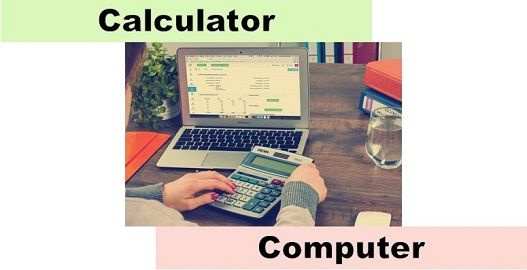 The term computer is derived from the word compute, which means . A computer can be considered as a super-fast calculator, but in present the computers handle various tasks such as logical operations, inserting, sorting, selecting, comparing different types of information rather than just handling the arithmetic operations.

A Calculator is basically used for executing the mathematical expressions founded on the inbuilt permanent instructions. It is not suitable for deriving the conclusion based on some logical decisions.

For example, to find the average of some marks obtained by students in a college, but other things like a range of marks such as in between 60-100 secured by the students would not be possible.

In the old days, the ancient humans used bones, pebbles, tally sticks, knots in cords and counting boards as the calculating and recording methods. Although, the first calculator got recognized was the abacus. This emerged the evolution of calculating devices like an anemometer, mechanical calculators, arithmometer, Basile Bouchon, difference engine, etc.

A Computer is an extremely enhanced version of a calculator. It can be programmed to solve the specific problems and provide the desired result after the mathematical and logical conclusion.

By taking the reference of the previous example, it is very easy to compute the average marks of the students. Similarly, in the second case where we want to find the marks of the students which scored between 60-100. A computer program can easily accomplish the given task by making a logical decision, as here we just want to compare the marks obtained by the students and arrange them in the range specified.

A computer is capable of performing a huge variety of tasks.

Generations of the Computer

Key Differences Between Calculator and Computer

Despite differences, there are many similarities between the terms calculator and computer. Now let’s discuss them too.