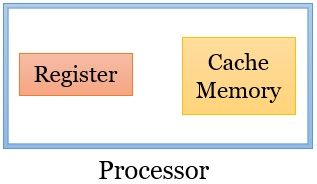 Cache memory and register both are the memory units of the computer. But they are not the same in terms of speed, size, access time, etc. Cache memory is an individual memory unit that stores the data that has been used recently by the processor. On the other hand, the register is a high-speed storage element that holds the data that the CPU is currently processing.

What is Memory Hierarchy?

In a computer system, there are different kinds of memory units. These memory units are organized in such a way that the memory nearer to the processor would have less access time.

What is Cache Memory?

Cache memory is an individual memory unit that is adjunct to main memory. Comparatively, it is smaller and much faster than the main memory. This is because it is tightly coupled with the processor and implemented on the processor chip itself.

Now, as it is smaller than the main memory, it can not hold the entire program at once. So, it holds sections of the program (set of instructions) that are currently in execution. Along with the set of instructions, it also holds the data associated with it.

How does Cache Memory Works?

In the beginning, the program and the data associated with the program lie in the main memory, and the cache is empty.

If execution of particular instruction requires any associated data, the processor access it from the main memory and places a copy of it on the cache memory also.

Now consider these instructions have to be executed repeatedly (as in the case of a loop). If the instructions are available in the cache, then the processor will directly access them from the cache memory. As the cache is faster than the main memory, it will ultimately fasten the execution.

There are multiple levels of caches. We can classify them on the basis of their size and speed.

Registers are inbuilt memory units on the processor chip. It is the smallest memory unit of any computer. The memory size of a register is from 2 MB up to a few KB. It can store one word of data. As it is the nearest memory to the processor, it has the fastest access time.

All CPUs have some registers that store instructions, variables, and temporary results. CPU also have some special registers for storing special data.

How does Register Works? 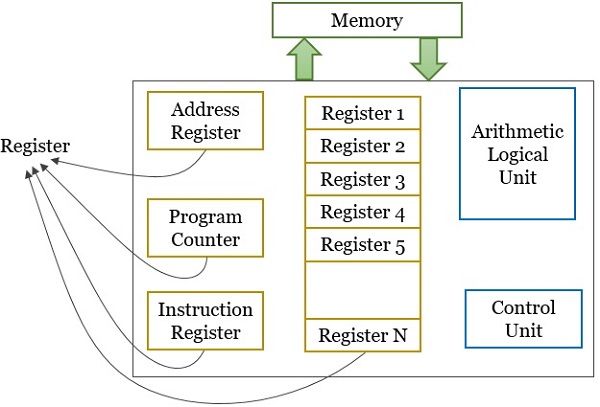 Only the primary cache (L1) and all kinds of registers are present on the processor. However, the registers are the smallest and most high-speed component of any computer. Although both of them are smaller memory units of computers, they are used for different purposes. The cache is used for storing recently used instructions and data, whereas the processor use registers to store instruction and data that it is currently processing.