Cache and main memory both are inboard computer memory. The cache holds the frequently used data. On the other hand, the main memory (RAM) holds the data that is currently in execution.

The cache is much faster and more expensive than the main memory. However, both of these computer memories are directly accessible by the processor.

Now before going ahead let us discuss what is computer memory.

What is a Computer Memory?

Memory is a hardware device used to store programs or data. Memory is further classified into two categories:

Although there are more variations of computer memory. The diagram below shows you the hierarchy of different kinds of memory. 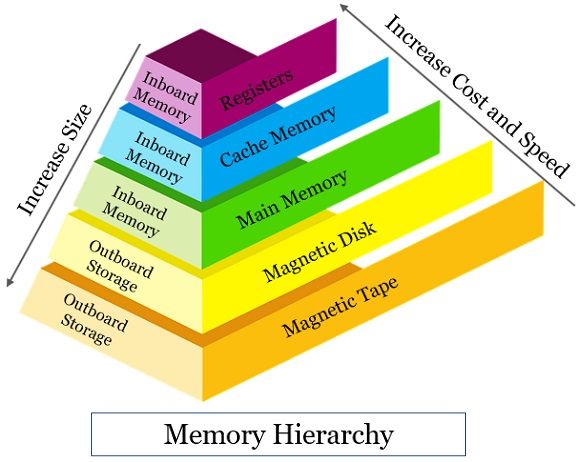 
What is Cache Memory?

It also copies data into the cache assuming that the processor will soon require this data. Thus, we can conclude that the cache holds frequently used data. So, whenever the processor requires the data next time it can access it from the cache at a much faster rate.

Here we can say that cache acts as a buffer between the main memory and processor. The capacity of the cache ranges from 2 KB to a few MB.

It is a technique used to load data from the main memory to the cache. Consider a situation where the cache is full. At this particular moment, the processor refers to a word that is not present in the cache.

So, the cache control hardware will remove a block to create a space for a new block containing a referenced word. Well, we have three-technique to do this as discussed below:

We can classify cache into three types based on its closeness to the processor.

Advantages and Disadvantages of Cache

What is Main Memory?

However, the main memory consists of a large number of semiconductor storage cells. Now, these cells are not accessed individually. Instead, the processor handles these cells in groups of fixed size that we refer to as words.

The processor is able to access a word in one basic operation. Conventionally the length of a word can be 16, 32, or 64 bits.

On the basis of technology, we can divide RAM into two categories that are static and dynamic RAM.

Advantages and Disadvantages of Main Memory