Array and structure both are the container data type. The major difference between an array and structure is that an “array” contains all the elements of “same data type” and the size of an array is defined during its declaration, which is written in number within square brackets, preceded by the array name.

A “structure” contains all the elements of “different data type”, and its size is determined by the number of elements declared in a structure when it is defined.

There are some more differences between an array and structure that are explored in a comparison chart given below.

An array is a collection of variable or elements of same data type. The elements in an array are collectively referred by a common name which is  a name of that array. The number of variables that an array will hold is defined at the time of declaration in square brackets preceded by the name of that array. In C++, there is strict bound checking on arrays; you can not store elements in an array, out of its bound.

Here, the type describes the data type of an array and, size defines the capacity of an array. Let’s declare an array of integer type and size 10, i.e. it will hold ten elements. The indexing in arrays starts from “0” up to “size-1”.

If you want to pass an entire array to a function, then it can be passed by its name, without any index. The array passed to a function is received by its function definition, and the receiving formal parameter is always a pointer variable. 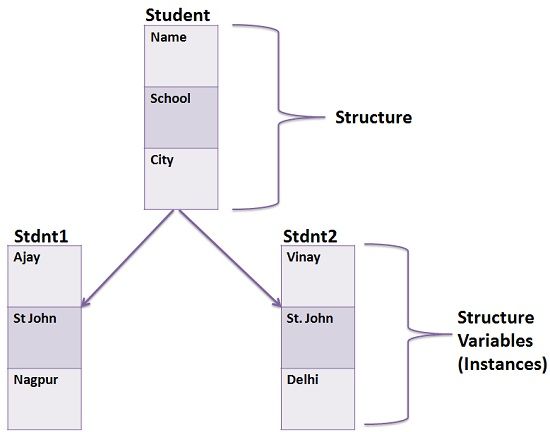 Let’s understand it with an example:-

We can also create a pointer to the structure:-

The aggregate initialization of the structure variable is also possible.

Key Differences Between Array and Structure

Arrays are accessed fast as the size of each element in an array is constant throughout. But, the structure is accessed slowly as each member in a structure variable is of different size.