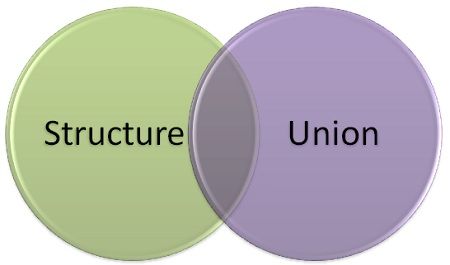 C++ allows all the five ways that the C language provided to create a custom data. Those five ways are ‘structure’, ‘bit-field’, ‘union’, ‘enumeration’, ‘typedef’. In the article below we are going to study the difference between structure and union. The structure and union both are the container data types that can hold data of any “type”.

When you declare a structure, you create a template, which can be used to create structure objects, sharing the same organization of data members and member functions. The declaration of the structure is always preceded by the keyword “struct”, which tells the compiler that a structure has been declared.

The members of a structure variable can be initialized or can be accessed by using the dot(.) operator.

Here, we assigned the structure variable ’emp1′ to ’emp2′ so, ’emp1′ copies all the value of its members to the corresponding member of ‘epm2’.

The member of the structure variable can be passed to the function.

The entire structure variable can be passed to the function, by both the methods call by value and call by reference.

Here, the change to the value of a member of the structure variable will not reflect outside the function as a variable is passed by call by value method. Now let’s do the same thing by call by reference method.

The pointer to the structure can also be created; it holds the address of structure variable.

In structure the aggregate initialization is allowed when the structure definition does not contain, any user defined constructor or virtual functions or base class or private or protected field.

A union is a memory location shared by two or more different type of variable declared under a single union type. The keyword used to declare a union is “union”. In C++, a union may contain both member function and variables. By default, all the members of the union are “public”.  Declaration of the “union” is similar to the declaration of the structure.

The accessing of members of the union can be done by using dot(.) operator, preceded by union variable and followed the member of that variable.

Like structures, the aggregate initialization is not possible in a union. As we know the union shares the same memory location for all of its member at a time only one variable is initialized and all the variable automatically updated with the initialized value.

If you try to change the value of any member of ‘u1’. The other member will be automatically updated to that value.

The pointer to the union can be created just as in structure. The pointer holds the address of the union.

Like structure, the union can also be passed to the functions by both the methods i.e. call by value and call by reference.

The points to remember for the normal union declaration.

Key Differences Between Structure and Union

Both, structure and union are the container datatype which contains the member of different types. But structures are used when we need to store distinct value for all the members in a distinct memory location. The unions are used when type conversion are needed.