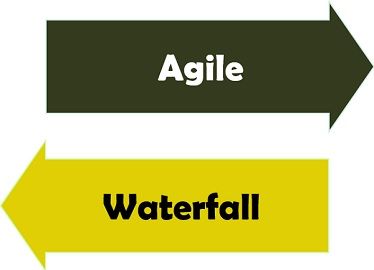 The Agile and Waterfall are the highly used SDLC (Software Development Life Cycle) models to develop software or web-based product. The process in an agile method involves iterations in which requirements are validated, designed and tested during the iterations. Conversely, in waterfall projects the requirements are fixed at the beginning then the other phases occur. With an agile method, the new requirements and changes can be implemented in the next iteration while this is not possible in the waterfall where the information and requirement gathering is done only once at a time.


Definition of Agile and

An agile method is a group of an iterative and incremental process, where each development process is treated differently and existing method need to be customized in order to best suit the project requirements. It provides a technique to evaluate the development and risk and also the direction in the whole development lifecycle. A series of rounds called iterations are used to create a product. Practically, each iteration takes up to 2-3 weeks for completing the job in which different teams are working, the tasks such as requirement gathering, requirement elicitation, planning, design, coding and testing.

The approaches followed by the agile model are:

Waterfall model is considered as the fundamental software development life cycle model which is also linear and sequential. For moving forward in the next phase the current phase needs to be completed entirely. The growth of the waterfall model is analogous to the waterfall as the name suggests, where water flowing from the edge of the cliff to the downwards could never back to the cliff. Hence, the process is irrevertable; phases can never be assessed in the backward direction.

Key Differences Between Agile and Waterfall

To develop a software any of the models can be used among waterfall and agile according to the requirements. However, both models hold equal importance against each other. Agile methodology is used when the small and frequent functionality or time to market is the priority. On the other hand, a waterfall model is useful where high-level business involvement is not required, but the quality is more important than speed.