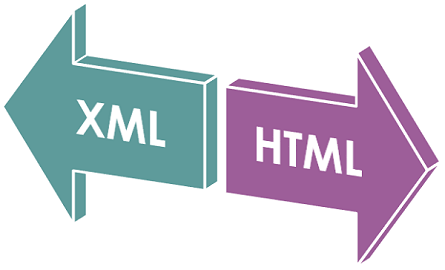 HTML (Hypertext Markup Language) was designed to facilitate the transfer of web-based documents. Conversely, XML was developed for providing interoperability with SGML and HTML and ease of implementation.

XML (Extensible Markup Language) is a language that enables a user to define a representation of data or data structure where values are assigned in each field in the structure. IBM devised it as a GML (Generalized Markup Language) in 1960’s. When the IBM’s GML is adopted by ISO, it named as SGML (Standard Generalized Markup Language) and it was the foundation for the complex documentation system. XML language provides a platform to define markup elements and generate customized markup language. In XML to create a language or elements, one must follow some set of rules defined in the XML. The XML document includes data as strings and text which is surrounded by text markup. The fundamental unit in the XML is known as an element.

XML document involves two parts – prolog and body. The prolog part of the XML consist of administrative metadata such as XML declaration, optional processing instruction, Document type declaration and comments. The body part is partitioned into two parts – structural and the content (Present in the plain text).

HTML (Hypertext Markup Language) is the markup language for constructing web pages. The markup commands employed in the web-based content signifies structure of the document and its layout to the browser. Browsers simply read the document with the HTML markup in it and render it on the screen through examining the placed HTML elements in the document. An HTML document is considered as a text file that holds the information need to be published.

The embedded instructions are known as elements which show the structuring and presentation of the document in the web browser. These elements are comprised of tags inside the angle bracket which surrounds some text. The tags usually come in a pair – beginning and ending tag.

Key Differences Between XML and HTML

XML and HTML markup languages are related to each other where HTML is used for the data presentation whereas the main purpose of XML was to store and transfer the data. HTML is a simple, predefined language while XML is the standard markup language to define other languages. XML document parsing is easy and fast.