WHERE and HAVING clause are mainly used in the statement of SQL queries, these allow us to restrict the combination in the result relation through using a specific predicate. The major difference between WHERE and HAVING is that WHERE clause specifies the conditions for selecting the tuples (rows) from the relations, including join conditions if needed. On the other hand, HAVING clause specifies a condition on the groups being selected rather than on individual tuples.

SQL stands for Structured Query Language; it is comprehensive or declarative database language used for accessing the data from the databases.


Definition of Where Clause

SQL also implements the logical connectives and, or and not in the WHERE clause which are also known as the boolean condition; the condition must be true to retrieve the tuples. The operands of the logical connectives expressions involve the comparison operators such as <, <=, >, >=, =, and <>. These comparison operators compare strings and arithmetic expressions. It can be used in the SELECT statement, as well as in UPDATE, DELETE statements.

Let’s take an example. The table shown below named as ‘Sales‘ table consists of ‘Product‘ and ‘Sales_amount‘ attributes. 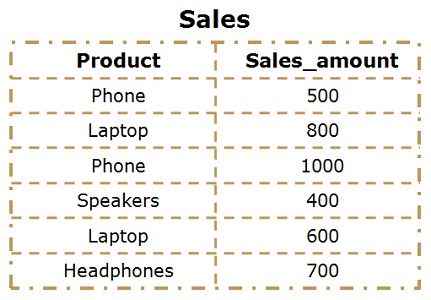 The following query is to be written to calculate the Total_sales of phone and speakers.

Following output is the resulting output where the rows are filtered first, phone and speaker rows are retrieved then the aggregate function is performed.

Definition of Having Clause

It behaves in the same as WHERE when GROUP BY keyword is not used. The Group functions such as min, max, avg, sum, and count can appear in only two clauses: SELECT and HAVING clause. It provides a condition on the tuples corresponding to each value in the group of attributes. The only set of records that satisfies the condition will be shown as the result.

Here also we are taking the same example as WHERE clause and considering the same ‘Sales‘ table. When we want to calculate the Total_sales of phone and speakers using HAVING clause, we will write the following query.

The query produces the following output where the products are retrieved first, then aggregate function (sum) is performed and at last groups are filtered unlike WHERE clause.

When we want to find only those products where the Total_sales is greater than 1000. The query can be written as:

The produced output is:

This can not be performed using WHERE clause in spite of HAVING and it generates an error message because WHERE clause cannot be used with aggregate functions.

Key Differences Between Where and Having Clause