Telnet and SSH are the general purpose client server application program and uses remote terminal service which allows a user at one site to interact with a remote time-sharing system at another site as if the user’s keyboard and a display connected directly to the remote machine.

The main difference between Telnet and SSH is that the Telnet is conventional protocol whereas SSH is the replacement for Telnet protocol and also SSH have enhanced features.

TELNET is a client-server program that permits the user to retrieve any application program on a remote computer. The function of a telnet is to provide the services to the user on the remote computer and transferring the result to the local computer. TELNET is an acronym for TErminal NETwork. TELNET facilitates the establishment of the connection to a remote system in a manner that the local terminal resembles to be a terminal at the remote system.

Whenever a user intends to access an application program or utility placed on a remote machine, then user performs Remote Login. Here the TELNET client server program is utilized. The user enters the keystrokes to the terminal driver, which is then accepted as characters by the local operating system. 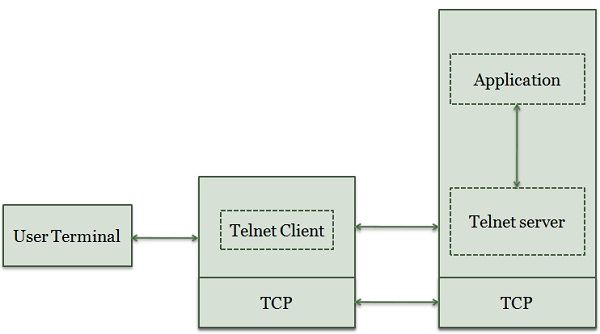 Although TELNET is widely used and is not as complex as some remote terminal protocols. Usually, TELNET client software permits the user to describe a remote machine either by the giving its domain name or IP address.

The three type of basic services that TELNET offers are:

SSH also provides remote command execution. When you log in, a pseudo-terminal is assigned to your session and your session, will remain open until you explicitly log out or is terminated from the server end. This protocol supports functionalities like Secure command-shell, secure file transfer and port forwarding.

Key Differences Between Telnet and SSH

The SSH protocol is a somewhat better replacement for Telnet as SSH has security measures. While Telnet does not provide much security although still in use.