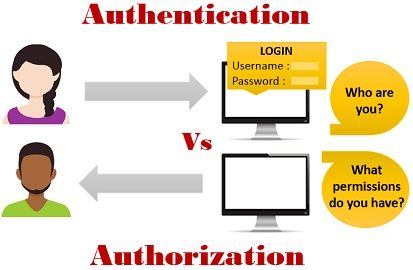 Authentication mechanism determines the user’s identity before revealing the sensitive information. It is very crucial for the system or interfaces where the user’s priority is to protect the confidential information. In the process, the user makes a provable claim about individual identity (his or her) or an entity’s identity.

The credentials or claim could be a username, password, fingerprint etc. The authentication and non-repudiation, kind of issues are handled in the application layer. The inefficient authentication mechanism could significantly affect the availability of the service.

For example, there is a sender A sending an electronic document to the receiver B over the internet. How does the system will identify that the sender A has sent a message dedicated to the receiver B. An intruder C may intercept, modify and replay the document in order trick or steal the information this type of attack is called fabrication.

Authorization technique is used to determine the permissions that are granted to an authenticated user. In simple words, it checks whether the user is permitted to access the particular resources or not. Authorization occurs after authentication, where the user’s identity is assured prior then the access list for the user is determined by looking up the entries stored in the tables and databases.

For example, a user X wants to access a particular file from the server. The user will send a request to the server. The server will verify the user identity. Then, it finds the corresponding privileges the authenticated user have or whether he/she is allowed to access that particular file or not. In the following case, the access rights could include viewing, modifying or deleting the file if the user has authority to perform the following operations.

Key Differences Between Authentication and Authorization