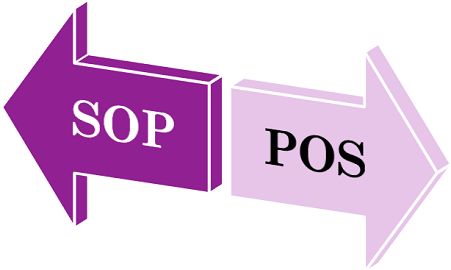 The prior difference between the SOP and POS is that the SOP contains the OR of the multiple product terms. Conversely, POS produces a logical expression comprised of the AND of the multiple OR terms. Before understanding SOP and POS, we must learn various related terms so that the entire thing would collectively make some sense.

When we add two or multiple product terms by a boolean addition, the output expression is a sum-of-products (SOP). For example, the expression a’bc’ + a’bd’ + a’bc’d shows a SOP expression. It can also have a single variable term within the expression like a + bc +a’b. These logical expressions are simplified in a way that they must not contain redundant information while creating the minimal version of it.

Domain of a boolean expression

Implementation of the SOP form

It is mainly implemented by an AND-OR logic where the product of the variables are first produced by AND gate and then added by the OR gates. For example, the expression “ab’+bcd+ac” can be expressed by the logic circuit shown in figure 1.1 where the output P of the OR gate is the SOP expression. 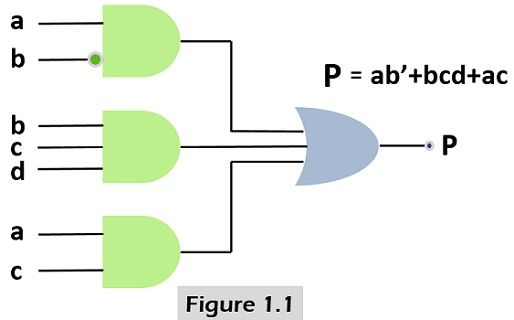 Steps for converting the product term into standard SOP

Here the standard SOP or canonical SOP refers to an expression in which all the variables of the domain are present. For generating, standard SOP from the product term the boolean rule “A+A’=1” (the output is ‘1’ when a variable added to its complement) is used and below given steps are followed.

The term ab’c+a’b’+abc’d converted into the standard SOP or canonical SOP by multiplying the part of the term by the missing term. Such as a’b’ is multiplied with the c+c’. Similarly, the whole expression is converted in its canonical form by the following given steps.

Now there are various terms which are used while generating the reduced logic function such as minterm, maxterm, k-map (Karnaugh Map), which we will elucidate further in the article.

In these terms, the input variables making up a boolean expression is the dot product of each other, and it is also known as minterm or product term. Mn following table presents the minterms of the variables. 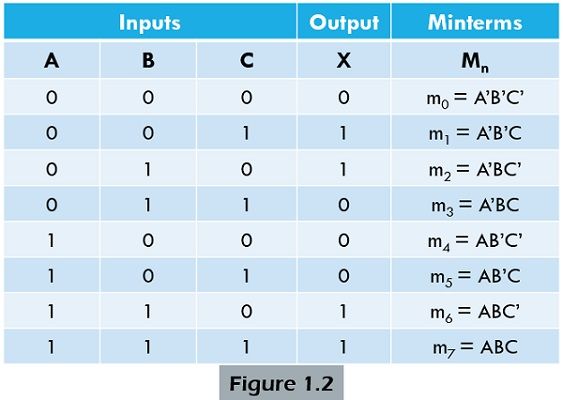 SOP expression from a Truth table

Suppose, we have a truth table (as shown in figure 1.3) in which each term of the input variables are written as the product of all the terms. To determine the input combinations that exist, we need to select the output having value 1 and convert the binary into relevant product term. Here, we will consider ‘0’ as the variable and ‘1’ as the compliment of the variable. 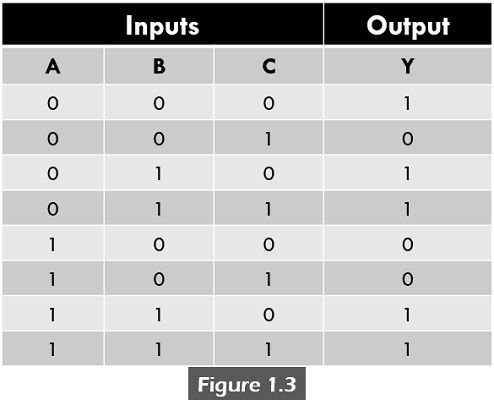 POS (Product of Sums) is the representation of the boolean function in which the variables are first summed, and then the boolean product is applied in the sum terms. For example, (a’+b).(a+b’+c) is POS expression where we can see that the variables are added then each bigger term is the product of the other.

Implementation of the POS form

It just needs the variables to be inserted as the inputs to the OR gate. The terms generated by the OR gates are inserted in the AND gate. The sum term is formed by an OR operation, and product of two or multiple sum terms is created by an AND operation. To understand the POS implementation refer the below given figure 2.1 of the expression (a+b).(b+c+d).(a+c). 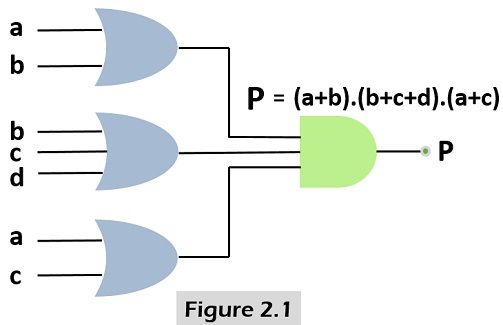 Steps for converting the product term into standard POS

Similar to the previous explanation, the standard or canonical POS is in which sum terms does not include all of the variables in the domain of the expression. Here, also we use the boolean algebra rule 8 “A.A’=0” (a variable multiplied by its complement is 0) to convert a term in a standard form, and the method is given below.

The term (a+b’+c)(b’+c+d’)(a+b’+c’+d) is translated into the standard POS or canonical POS by adding each term with the missing term (which is a product of its complement). Such as “a+b’+c” is summed with the d.d’. In this way, the entire expression is converted in its canonical form by the following given steps.

These are the terms in which the input variables are present in summation form, alternately called as sum term. The below-given table represents the Mn, maxterms of the variables. 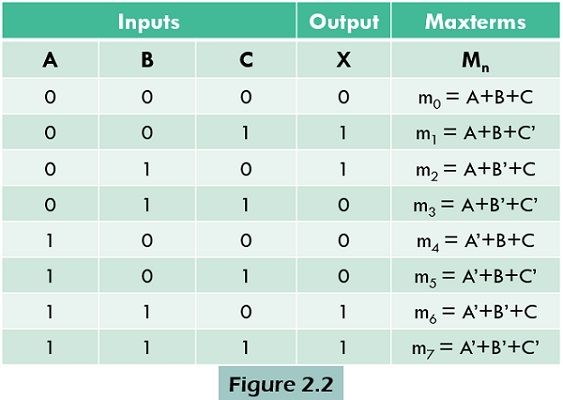 POS expression from a Truth table 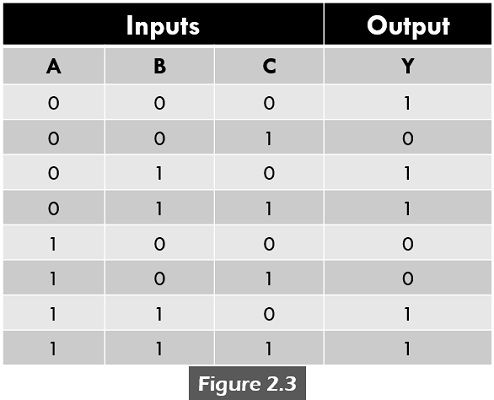 Key Differences Between SOP and POS

It is quite similar to a truth table where we have various probable values of the input variables and the outcome for each value. A karnaugh map provides an organized way for simplifying boolean expressions and helps in constructing the simplest minimized SOP and POS expression.

The SOP and POS, both forms are used for representing the expressions and also holds equal importance. In an effort for finding whether your reduced boolean expression is correct or not for designing the logical circuit, one can compare the SOP and POS form of expression and check whether they are equivalent or not. Additionally, for any binary value, the resultant of SOP and POS are either be both 1 or 0 based on the binary value.