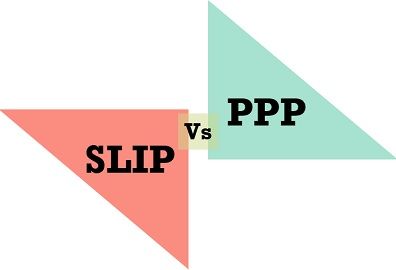 SLIP and PPP are the two distinct independent serial link encapsulation protocols. The significant difference between the SLIP and PPP is that SLIP is the earlier version protocol while PPP is the later variant which gives several advantages over SLIP such as detection and prevention of misconfiguration, etcetera. Furthermore, PPP supplies greater built-in security mechanism.

These protocols involve just two devices and between those two devices, the straightforward communication takes place. It provides connectivity on the second layer for TCP/IP implementations.

The SLIP (Serial Line Internet Protocol) mainly serve the purpose of framing the IP packets along the serial lines mostly in a dial-up connection where the line transmission rate could be in the range of 1200 bps and 19.2 Kbps. However, there is no provision of for addressing, packet type identification, compression or error detection/correction mechanisms but it is easily implemented.

The SLIP was first introduced in the year of 1984 and implemented on the 4.2 Berkeley and Sun Microsystems Unix platforms. The development of slip is stimulated by the availability of Unix workstation enabled with TCP/IP capabilities. Later, the SLIP protocol development moved to personal computers when the personal computers evolved to support TCP/IP.

A SLIP connection facilitates PCs communication with the native Internet Protocol and turns it into an internet host. It eliminated the need of connecting the PC user to the internet connected central computer. So, SLIP provided the internet services to the personal computers directly.

Now, how does these PC’s are connected to the internet? For establishing the connection between a PC and internet router (able to transfer TCP/IP protocols), telephone lines are used along with SLIP support. Practically, these internet routers can be internet host enabled with routing functions.

PPP (Point-to-Point) protocol render a standard method for the transfer of the multiprotocol datagrams (packets) along a point-to-point link. The main elements of PPP are – a mechanism for encapsulating multi-protocol datagrams, LCP (Link Control Protocol) and a group of NCP (Network Control Protocols). LCP mainly sets up, configure and test the connections while NCP is responsible for establishing and configuring the distinct network layer protocols.

The PPP was developed by the IETF (Internet Engineering Task Force) in November 1989. As the antecedent, the non-standard method SLIP did not support features such as error detection and correction, and compression gave rise to the development of the PPP protocol. The earlier existing standard only assist datagram encapsulation for the popular local area network not for the serial connections.

PPP has emerged as an internet standard which facilitates in encapsulation and transfer of the datagrams over the point-to-point serial link. A datagram very similar to a packet in the context of the packet-switched network, but it does not rely on the physical network and does not contain packet switching node number and PSN destination ports.

Key Differences Between SLIP and PPP

Advantages of PPP over SLIP