The SIP and VoIP are the technologies work for enabling any type of communication over the internet. However, the VoIP is separately used for IP telephony, but SIP is the protocol which handles the overall exchange of multimedia. More specifically, the SIP signalling protocol is the way to standardise the VoIP or IP telephony.

The SIP (Session Initiation Protocol) is used to set up the internet telephone calls, video conferencing and other multimedia connections. On the other hand, the Voice over IP is used to transfer the voice traffic through the data networks.

SIP (Session Initiation Protocol) is a group of rules that govern the multimedia exchange over the internet. The SIP is the control protocol of the application layer responsible for setting, manipulating and ending the multimedia sessions with one or more users, the multimedia session can contain any sort of multimedia, including data, voice, video, image, etcetera. In simpler terms, SIP works in a similar way as the HTTP works, where a request and response model is followed.

The entire process of the SIP protocol is explained in the steps below:

There are generally four components of Session Initiation Protocol, which are discussed below.

The SDP (Session Description Protocol) is used to provide the information about the call. SIP can also provide features such as call waiting, call screening, authentication and encryption. It can also place a call from an IP enabled equipment to an ordinary telephone.

VoIP (Voice over IP) is the utilisation of IP for enabling the telephone service. The alternative name for the VoIP is the IP telephony. There are three components necessarily required for achieving VoIP (Voice over IP). Priorly, it needs a protocol like RTP to accurately transfer the digitised signal along the IP network. Secondly, it requires a mechanism to set and end the calls. At last, an isochronous network of the IP network.

Referring to the below-given diagram, the IP telephone system is linked to the wide area IP network and LAN too. To make the voice calls locally, the LAN is used. The speech is digitised and encoded with the help of the codec device installed in the IP phones. These phones also include the functions such as packetisation and depacketization of the encoded speech. 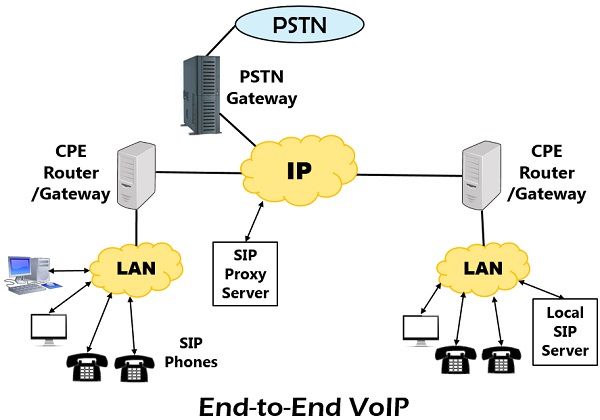 Wide area IP network is used to make the calls between the distinct sites. IP phone registration, call signalling and coordination is done through the Proxy server. It can also provide cross-compatibility with the traditional PSTN network using VoIP gateway.

Key Differences Between SIP and VoIP

SIP creates a VoIP system that connects you to the phone networks. SIP is a protocol is mainly used for signalling and establishment of the internet telephone call, video conferences and other multimedia connections. On the other hand, the VIOP is used to drive the voice traffic along the IP network. The advantage of the SIP is that it can intelligently interplay with other protocols.