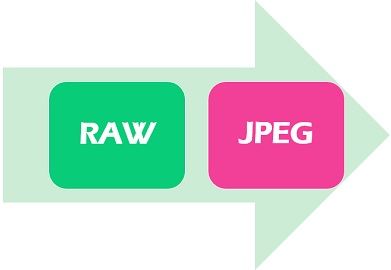 The different types of file formats are used to process the different types of files, such as text, image, audio, video, and the content of the file helps in distinguishing the files. Here, we are discussing the bitmapped image format. A bitmapped image is generated by a pattern of discrete elements and these discrete elements are the pixels or picture elements.

JPEG is an image file format that stands for Joint Photographic Experts Group. It is cross-platform format as it is not specifically used in particular software or program and supported by all manufacturers. This image format is capable of efficiently compressing bitmapped images comprised of a wide range of colours. It is majorly used in digital cameras and the format is highly preferred for the web because of its photo-quality images.

JPEG provides 24-bit colours and interlacing for displaying a low-resolution version prior to the complete image file which does not raise the condition of the black screen during the downloading process. For more information about interlacing refer to the article difference between progressive and interlaced scan.

From the previous articles the difference between JPEG and GIF, we know that JPEG is a lossy compression technique, where some amount of information is lost and the amount of the information loss from the image is controllable. The JPEG image can also be saved without compressing it. However, it is not preferred as a negligible amount of compression would not much affect the quality of the image but can reduce the size of the image file at a greater amount.

RAW is also a bitmapped graphics format, that is more prevalent in multimedia. It is considered a group of formats, instead of a single standard. It can preserve more image information than any other image format that is the reason the RAW format files consumes a massive amount of space.

The RAW image format cannot be stored and edited by any ordinary software as it is proprietary file format. The proprietary format means that a particular RAW file can be processed by the software developed by the camera manufacturing company from which the image has been captured.

There is a large scope for the RAW files as they store more information about brightness and other image properties, so they are intended for employed in the photo-editing software which could support a broad range of editing options. To convert the RAW files in other formats like JPEG, TIFF, PNG, we can use appropriate software.

Key Differences Between JPEG and RAW