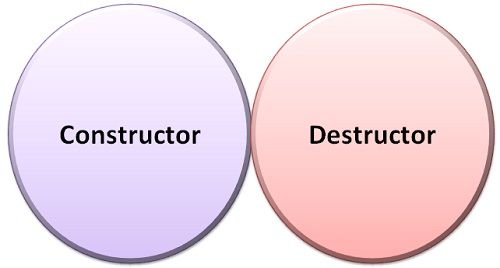 Sometimes it is required to initialize some part of an object before it can be utilized. For example, we are operating on the stack, before we perform any action, the top of the stack must always be set to zero. This feature of automatic initialization is performed through ‘Constructor’.

A constructor is basically a member function of class, which initializes the object and allocates memory to it. Constructors can be easily identified as they are declared and defined with the same name as that of the class. A constructor does not have any return type; so, they do not return anything, not even ‘void’. A Constructor is always defined in the public section of a class.

Constructors can also be defined with the default arguments. Whereas, they also initialize the object “dynamically”. Constructors can neither be inherited, nor it can be virtual but, they can be overloaded. They can’t be referred to their address.

There are basically three types of constructors- Default, Parameterized, and Copy Constructors.

A Destructor is also a member function of a class, which deallocates the memory allocated to an object. It is defined with the same name as that of a class, preceded by a tilde(~) symbol. Destructors are always called in the reverse order of the constructors.

When C1 object is created, a constructor with two parameters of integer type is invoked and the member “a, b” gets initialized and the value of “a, b” are printed. After that destructor gets invoked and prints the message “object C1 get destroyed”.

The creation of the constructor consumes some amount of memory space, as it ultimately allocates memory to the objects. This allocated memory must be deallocated prior to destroying the objects to free up the resources for other tasks. Destructors are extremely useful for the intended purpose, which effectively destroys objects and carries out clean-up tasks for releasing the memory.

Key Difference Between Constructors and Destructors

Both constructor and destructor are implicitly called by compiler even though they are not defined in the class.