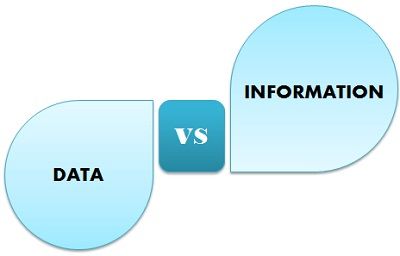 Data is raw, unanalyzed, unorganised, unrelated, uninterrupted material which is used to derive information, after analyzation. On the other hand, Information is perceivable, interpreted as a message in a particular manner, which provides meaning to data.

Data doesn’t interpret anything as it is a meaningless entity, while information is meaningful and relevant as well. Data and Information are different common terms which we frequently use, although there is a general interchangeability between these terms. So, our primary goal is to clarify the essential difference between Data and Information.

Data is distinguishable information that is arranged in a particular format. Data word stems from a singular Latin word, Datum; its original meaning is “something given”. We have been using this word since 1600’s, and data turn into the plural of datum.

To store data, earlier punched cards were used, which were then replaced by magnetic tapes and hard disks.

There are two variants of data, Qualitative and Quantitative.

Information is what you get after processing data. Data and facts can be analysed or used as an effort to gain knowledge and infer on a conclusion. In other words, accurate, systematize, understandable, relevant, and timely data is Information.

Information is an older word that we have been using since 1300’s and have a French and English origin. It is derived from the verb “informare” which means to inform and inform is interpreted as to form and develop an idea.

Unlike data, Information is a meaningful value, fact and figure which could derive something useful.

Let us take an example “5000” is data but if we add feet in it i.e. “5000 feet” it becomes information. If we keep on adding elements, it will reach the higher level of intelligence hierarchy as shown in the diagram.

Key Differences Between Data and Information

Data and Information, both the terms we use are a part of intelligence hierarchy and differ in the way that Data is not meaningful, but Information which is formed by the processed data is meaningful in context.