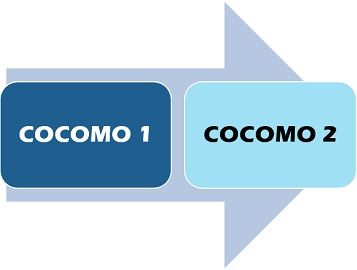 The COCOMO 1 and COCOMO 2 are the cost estimation models developed by Barry Boehm for computing the cost of the developing software. Initially, COCOMO basic model was introduced, followed by the enhanced versions of the COCOMO model. The main difference between these COCOMO models is that the COCOMO 1 is completely premised on the linear reuse formula and the hypothetical idea about the stable set of requirements. In contrast, the COCOMO 2 is founded on the non-linear reuse formula, and also provide auto-calibration characteristics.

Before the development of a project, it is necessary to find the cost and time needed to develop it efficiently. Previously we didn’t have any method to find the cost, manpower and time going to be required in developing a particular software product. COCOMO model was proposed to solve regarding issue of estimating the relevant factors and mainly the cost. In this article, we are going to discuss  COCOMO 1 and COCOMO 2 models.

COCOMO model was first introduced in the year of 1980s by Barry W. Boehm, which was the most straightforward model proposed to compute the software cost, development time, average team size, and effort required to develop a software project. This model uses the number of lines of code (in thousand) delivered.

The software projects are classified into three types, in order to estimate effort accurately.

The coefficients a1, b1, a2 and b2 for three modes are as given below.

COCOMO 1 model is absolutely based on the waterfall model, but due to acquiring the object-oriented approach in the software development process, the COCOMO 1 does not produce accurate results. So, to overcome the limitations of COCOMO 1, COCOMO 2, was developed.

The prior aim of the COCOMO 2 model is to generate the support capabilities for amending the model constantly and provides quantitative analytic structure, techniques and tools. It is also capable of examining the effects of software technology improvements in the expense of software development life cycle.

Key Differences Between COCOMO 1 and COCOMO 2

The COCOMO models were developed in different era according to the advances in programming and software development and engineering techniques the COCOMO models have also been evolved. The COCOMO 2 model is more comprehensive as compared to COCOMO 1. As the COCOMO 1 was devised for the softwares developed using procedural languages and constructs while in present scenarios most of the languages and software are developed using object-oriented paradigms for which COCOMO 2 is more suitable.