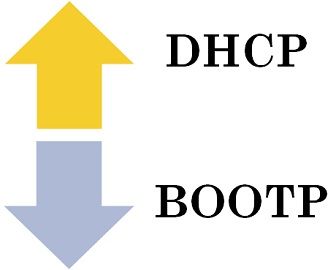 The BOOTP and DHCP protocols are used for obtaining the IP address of the host along with the bootstrap information. The working of both protocols is different in some manner. DHCP protocol is the extended version of the BOOTP protocol.

Bootstrap Process: It is a method of accessing the information of an internet connected computer such as (IP address, subnet mask, router address, IP address of the name server) stored in a configuration file these pieces for information are need be known to the computer connected to a TCP/IP internet.

Bootstrap Protocol (BOOTP) is a client-server protocol designed to obtain the above given information (i.e., IP address, subnet mask, router address, IP address of the name server) from a diskless computer or a computer booted for the first time. The operating system and networking software are stored in the read-only memory (ROM), if the computer or workstation is diskless.

RARP is the predecessor of BOOTP and serves the same purpose, but the limitation of the RARP is that it only provides the information about IP not the extra information regarding that.

As described above the BOOTP is a protocol which enables static configuration. The reason behind the BOOTP static nature is that the need of dynamically discover routers or change router is eliminated when only one router is connected to the rest of the internet. However, if there are multiple routers are connected to the internet. A host attempts to obtain the default route at the startup can result in connection loss if a single router crashes. And also the crash can be not detected.

BOOTP server uses a table that has a mapping of the physical address to the IP address when a client enquires its IP address. BOOTP does not support mobile machines; it works well only when the binding between Physical and IP addresses is static and fixed in the table. It uses limited broadcast address (255.255.255.255).

Dynamic host configuration protocol (DHCP) assigns the IP addresses dynamically over the network. DHCP is more versatile than BOOTP, and it is backward compatible which means that it can interoperate with BOOTP clients.

DHCP assists impermanent allocation (leases) of IP addresses. In other words, the IP’s are assigned for a limited amount of time and as the lease expires the IP’s are withdrawn. DHCP is necessary for the wireless networks where these computers can fasten and unfasten quickly.

Key Differences Between BOOTP and DHCP

BOOTP and DHCP are the protocols which a host uses to access or configure IP parameters from the server. DHCP is the extension of BOOTP. In BOOTP these operations take place at the boot time of host. DHCP is popular with ISP’s because it allows a host to obtain a temporary IP address while this is not the case in BOOTP. DHCP provides more detailed information and is more efficient than BOOTP.