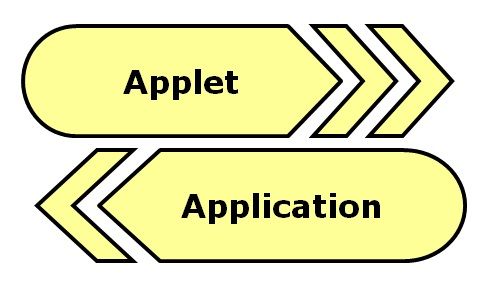 The common difference between Applet and Application is that application starts its execution through main() method conversely an applet doesn’t use method main() instead it initialize through init().

Applets are small programs generally written to be transmitted across the internet and automatically executed by java compatible web browser. And applications are stand-alone programs written for performing general operations by the user directly, and it doesn’t need any JAVA enabled APIs’ (browsers).

Applets are not affected by the users operating system or hardware. If the browser has the proper JVM installed then these applets run with the help of JVM. While the look and feel of the application on the various operating system remain the same.

Applets are small programs that utilize an external API for its execution and are primarily used in internet computing. They can be transferred over the Internet from one computer to another and run using the Applet Viewer or any web browser that supports Java. An applet can support several applications such as executing arithmetic operations, the creation of animation, graphics displaying, playing interactive games.

Java has transformed the manner the Internet users retrieve and use documents on the world wide network. Applets have enabled to construct and use completely interactive multimedia Web documents. A web page can include a java applet which, when executed, can generate graphics, sounds and moving images rather just containing plain text or a static image.

There are two ways an applet can integrate into web pages.

These types of applets which are developed externally and stored on a remote computer to the Internet are known as a remote applet.

An Application is a program which runs on an underlying operating system. These are generic in a sense and designed to perform a specific task directly for the user. The application can run with or without GUI.

The application programs like spreadsheets, word processors, web browsers and compilers – describe the manners in which computer resources are utilized to resolve users’ computing issues. There are no security concerns while using an application; its cause is that applications are trustworthy.

Key Differences Between Applet and Application

Lets understand the difference between applet and application through the given points:

Applets and Applications in the context of JAVA (programming language) are considered as programs although their usage and execution are different. Both have their specific importance according to the usage.