A server is a central repository where data and computer programs are stored and accessed by the clients in the network. Web server and Application server are types of the server where former is used to deliver web pages, and the latter deals with application operations performed between users and back-end business applications of the organization.

A Web Server is a program that accepts requests for information and sends the required documents. An application server could be a program or a computer running a program in a distributed network.

A web server is a program which delivers web contents like web pages using Hyper Text Transfer Protocol (HTTP) over the World Wide Web (WWW). It could also be interpreted as a virtual machine that is a program. The primary objective of a web server is to deliver web pages to clients such delivery consists of HTML documents or additional content such as style sheets and javascript. 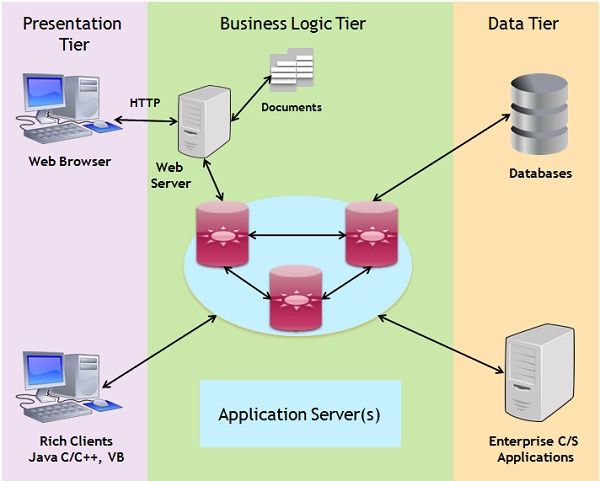 It is a group of elements which are accessible to the software developer through an API defined by the platform itself in web applications. These elements are often on the same machine as the web server as its main task is to support the construction of dynamic pages. It not only targets generation of web pages, but it also employs services like clustering failover and load balancing which facilitates developers to invest all the focus on implementing business logic.

Web servers are primarily designed to serve HTTP content whereas Application server can also suffice HTTP content but is not restricted to just HTTP and assists protocol such as RMI/RPC. An application server can contain web server in it, which means it can perform operations performed by a web server as well as it has additional elements and features to assist connection pooling, object pooling, transaction support, messaging services, etcetera.