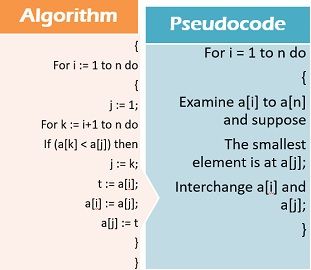 An algorithm is a sequence of steps which is utilized in order to solve a computational problem whereas pseudocode is nothing but a more simple form of an algorithm which involves some part of natural language to enhance the understandability of the high-level programming constructs or for making it more human-friendly.

Computer programming contains an enormous part, of generating unambiguous, sequence-wise procedures for the computer to follow in order to produce particular results. Algorithms are considered to be the foundation of computer programming.

Algorithm term was coined by a Persian author, Abu. Jafar Mohammad bin Musa al-Khowarizmi and holds a special significance in the field of computer science. It is an approach used by a computer for the solution to a problem. More specifically, an algorithm is a definite set of unambiguous rules (instructions) which describes a fixed series of operations that are helpful in providing the solution of a problem or to a particular class of problems for any permittable set of input quantities.

Alternately, an algorithm is a series of instructions for executing some step by step process, sequence-wise. It can be explained with an example of a recipe of a dish. So, to make that dish there must be a set of requirements or ingredients and the process of cooking them. In a similar way, an algorithm that a computer runs can be comprised of thousands or millions of small steps like addition, subtraction, multiplication from lower to a higher level of mathematical operations. Algorithms are implemented in each and every field such as in a manufacturing process of a product, reservations of an airline, banking services, etcetera. These algorithms involved in large scale processes could be intensively complex, however, they are constructed in parts.

There is a certain criterion which an algorithm must satisfy, which is described below:

Pseudocode is the expressive form of the algorithm or a way to describe an algorithm. It is a combination of natural language and high-level programming practices which represent the fundamental concept behind a general implementation of a data structure or algorithm. Pseudocode incorporated the natural language when the details are insignificant with the standard programming language constructs to obtain more clarity. However, we can not execute pseudocode on a computer, but it models the actual programming code along with a similar level of detail.

Pseudocode is also written using some specific words and characters, which are shown below:

Key Differences Between Algorithm and Pseudocode

Algorithm and pseudocode are not different concerning programming language, pseudocode more understandable form of an algorithm.