Talking about the Strong and Weak entity, we must know what does an entity means. An entity is a unique object in the real world. It is described as the set of attributes. The collection of the same type of entities together forms the entity set.

Let us understand this concept with the help of an example; a customer borrows a loan. Here we have two entities first a customer entity, and second a loan entity. 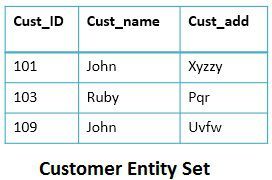 The second thing you can observe that the Customer entity has as primary key Cust_ID which uniquely identify each entity in Customer Entity set.  This makes Customer entity a strong entity on which a loan entity depends.

The collection of similar weak entities is called Weak Entity Set. The relationship between a weak entity and a strong entity is always denoted with an Identifying Relationship i.e. double diamond.

For further illustration let us discuss the above example, this time from weak entity’s point of view. We have Loan as our weak entity, and as I said above for each loan there must be at least one borrower. You can observe in the loan entity set, no customer has borrowed a car loan and hence, it has totally vanished from loan entity set. For the presence of car loan in loan entity set, it must have been borrowed by a customer. In this way, the weak Loan entity is dependent on the strong Customer entity. 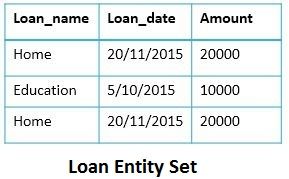