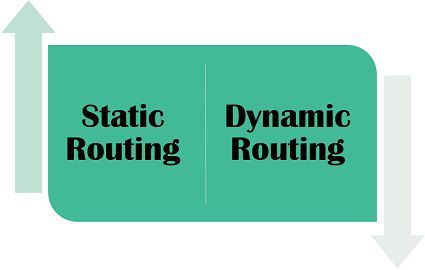 Routing algorithms in the context of networking can be classified variously. The prior classification is based on the building and modification of a routing table. This can be done in two manners statically or dynamically. More precisely these are known as static and dynamic routing respectively.

Routing is the process of transferring the packets from one network to another network and delivering the packets to the hosts. The traffic is routed to all the networks in the internetwork by the routers. In the routing process a router must know following things:

Static routing does not involve any change in routing table unless the network administrator changes or modify them manually. Static routing algorithms function well where the network traffic is predictable. This is simple to design and easy to implement. There is no requirement of complex routing protocols.

The routing decisions are not made by current topology or traffic because the static routing systems can not react to network changes hence it doesn’t require extra resources to learn the changes. That is the reason, static routing is considered as inappropriate for large and constantly changing networks.

Static routing is also known as non-adaptive routing which enables a pre-computed route to be fed into the routers offline. The administrative distance is a metric to measure the trustworthiness of the information received from a router. The default administrative distance for static route is 1, consequently the static routes will only be covered in the routing table when there is a direct connection to that network. Static routes can be considered as an efficient method for a small and simple network that does not change frequently.

Dynamic routing is a superior routing technique which alters the routing information according to the altering network circumstances by examining the arriving routing update messages. When the network change occurs, it sends out a message to the router to specify that change, then the routes are recalculated and sent as a new routing update message. These messages pervade the network, enabling the router to change their routing tables correspondingly.

The technique uses routing protocols to disseminate knowledge such as RIP, OSPF, BGP, etc. Unlike static routing, it does not require manual updation instead its automatic in manner and updates the routing table information periodically relying upon network conditions. For doing so, it requires extra resources for storing the information.

Dynamic routing or otherwise called as adaptive routing. The routing decisions are altered in these algorithms to mirror the changes in the topology or traffic. There are various adaptive algorithms which can be classified according to the source of information (from where router get the information, adjacent routers or from all routers), change in routes (whether the route is changing when load changes or when topology changes), optimization metrics used (distance, number of hops, residual bandwidth).

The routes on which dynamic routing is performed are known as dynamic routes where the information is responsive to changes in the network so that it is consistently being updated. Though, there is always a slack between the period that a network changes and when all the routers are informed about the change. The router tries to match the network change, and it causes a delay which is also known as convergence time. The convergence time must be shorter. The larger network requires dynamic routing because with static routing larger networks could not be manageable and result in loss of connectivity.

Advantages and Disadvantages of Dynamic Routing

Routing is one of most important operation of computer networking in which the data packet is moved from source to destination using an optimized path with a low delay; the path is elected with the help of routing techniques. The difference between static and dynamic routing lies in the table entries updation. In static routing, the routing information is manually updated while in dynamic routing the information is automatically updated using protocols.