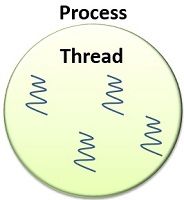 Process and thread share a relationship where a process provides an environment for the execution of the thread. A process can contain multiple threads. There are some other differences between process and thread which are discussed in the comparison chart.

An executing program itself is called a process. It can be explained with an example say when you click on any application, and it starts we can say that a process has been started. Every process has its own address space hence, they do not overlap each other.

In a process-based multitasking, more than two processes can run simultaneously on the computer. A process can contain multiple threads, where every thread is responding different request of the user.

Process are also called heavyweight task. Process-based multitasking leads to more overhead. Inter-process communication is very expensive is also limited. Switching from one process to also expensive. Java does not control the process based multitasking.

The threads are extensively used in Java-enabled browsers. A thread is a part of a process. A process can contain multiple threads. These multiple threads in a process share the same address space of the process. Each thread has its own stack and register to operate on.

Let us see how a thread is created. There are two methods to create a thread. First, you have to define a class that must extend the “Thread” class and further it must override the run( ) method of the Thread class.

Second, you can also implement the Runnable interface that contains only the run( ) method, that is to be defined by the implementing class.

The run( ) method is defined in such a way to perform the action as the user wants. The start( ) method is used to invoke the run( ) method. Which method to apply is based upon what type of class we are creating. If a class is already extending another class, then it cannot extend the Thread class as in Java a class can not extend two classes then, no choice it has to implement the Runnable interface.

Key Differences Between Process and Thread in Java

If we look at the process and thread, the thread is a piece of code which requires the environment of the process to run smoothly.