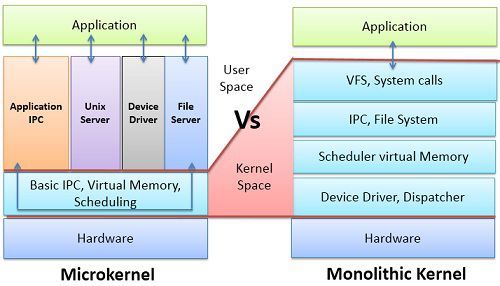 Kernel is the core part of an operating system; it manages the system resources. Kernel is like a bridge between application and hardware of the computer. The Kernel can be classified further into two categories, Microkernel and Monolithic Kernel. Microkernel is the one in which user services and kernel services are kept in separate address space.

However, in Monolithic kernel user services and kernel services both are kept in the same address space. Let us discuss some more differences between Microkernel and Monolithic kernel with the help of comparison chart shown below.

In addition to the communication between application and hardware of the system, the microkernel provides minimal services of process and memory management. The communication between the client program/application and services running in user address space is established through message passing. They never interact directly. This reduces the speed of execution of microkernel.