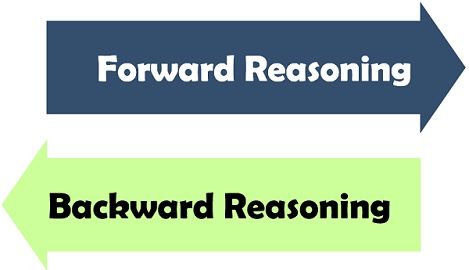 In Artificial intelligence, the purpose of the search is to find the path through a problem space. There are two ways to pursue such a search that are forward and backward reasoning. The significant difference between both of them is that forward reasoning starts with the initial data towards the goal. Conversely, backward reasoning works in opposite fashion where the purpose is to determine the initial facts and information with the help of the given results.

The solution of a problem generally includes the initial data and facts in order to arrive at the solution. These unknown facts and information is used to deduce the result. For example, while diagnosing a patient the doctor first check the symptoms and medical condition of the body such as temperature, blood pressure, pulse, eye colour, blood, etcetera. After that, the patient symptoms are analysed and compared against the predetermined symptoms. Then the doctor is able to provide the medicines according to the symptoms of the patient. So, when a solution employs this manner of reasoning, it is known as forward reasoning.

Steps that are followed in the forward reasoning

The inference engine explores the knowledge base with the provided information for constraints whose precedence matches the given current state.

The backward reasoning is inverse of forward reasoning in which goal is analysed in order to deduce the rules, initial facts and data. We can understand the concept by the similar example given in the above definition, where the doctor is trying to diagnose the patient with the help of the inceptive data such as symptoms. However, in this case, the patient is experiencing a problem in his body, on the basis of which the doctor is going to prove the symptoms. This kind of reasoning comes under backward reasoning.

Steps that are followed in the backward reasoning

In this type of reasoning, the system chooses a goal state and reasons in the backward direction. Now, let’s understand how does it happens and what steps are followed.

Key Differences Between Forward and Backward Reasoning in AI