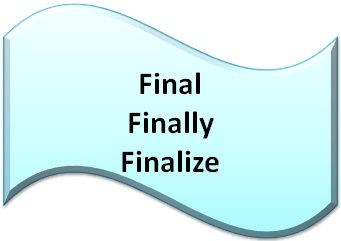 There are some other differences between final, finally, and finalize which are discussed in the comparison chart.

“Final” is a keyword in Java. It is an access modifier. The “final” keyword is applicable to the classes, methods and variables. Let us see how it works with each of them.

The general form of the method finalize() is as follow.

The finalize method is declared as protected so that it can not be accessed from outside the class.

This method is always called before the garbage collection.

Final, finally and finalize has a different effect when applied on a method.