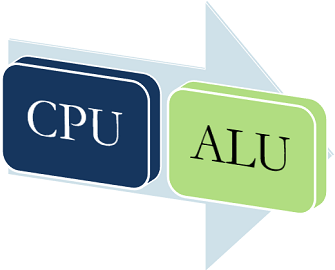 The CPU and ALU are the parts of the computer, without which a computer would never work well. Here, the main difference between CPU and ALU is that the CPU handle almost all the task that goes in the system while ALU handles the only arithmetic operation of the computer. CPU is intended to use the information in the program memory (instruction) to control the operation of the device. These instructions operate on the data memory and to operate on the data memory the logical arithmetic unit is required.

CPU expands to the Central Processing Unit which makes execution of the machine language instructions possible and organises the activities of the other units in the computer. It carries out a task such as fetching, decoding, and execution of the instructions. However, the term central in central processing unit is not very appropriate as nowadays we use several processing units.

The organization of the processors developed over the years, geared by the evolution in the technology and the need to provide high performance. To obtain great performance, it is crucial to make several functional units of the processor operate in parallel as much as possible. These types of processors usually have a pipelined organization in which the consecutive instruction is executed only until its preceding instruction has finished its execution.

The primary structural component of the CPU contains

The ALU stands for the Arithmetic Logical Unit is a part of the computer used to carry out the arithmetic and logical units. However, the other components of the computer system like control unit, memory, registers, I/O are primarily used for moving the data into the ALU and then drawing the result out from it. It can be considered as the essence of the computer.

An ALU or all other electronic components in the computer is constructed by the simple digital logic devices which are capable of storing the binary and performing simple boolean logic operations. The below-given diagram shows the interconnection of ALU and the processor. Operands for arithmetic and logic operations are inserted in the ALU registers, and the outcome of operation are stored in registers. The registers act as the temporary storage device which is linked by signal paths to the ALU. The result of the operation in ALU can also set flags.

Key Differences Between CPU and ALU

CPU is considered as the major component of the computer whereas ALU is a part of the CPU.