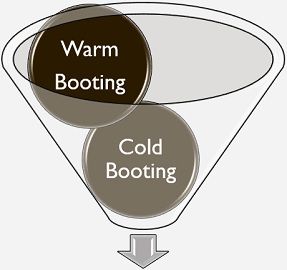 In a broad sense, Booting is a process of starting a computer and specifically handing over the control to the operating system. There are two forms of booting, Cold Booting and Warm Booting, here we are going to learn the difference between them. The notable difference between them is that the Cold Boot occurs at the beginning where the state of the primary components of the computer and RAM is checked with the help of Power On Self Test (POST) before loading the operating system. Conversely, Warm Boot skips the primary self-test and starts loading the operating system directly.

The procedure followed in the past days of computing was completely different where the programs were manually inserted in a computer before using them. However, today, this not the scenario, the applications and programs are once installed can be used any time.

At this point, we know what the booting process is, in a general way. Now, what is the cold booting? It is the first thing that a computer does when we turn it ON from OFF position. In the very first stage, the microprocessor is initialized. The steps conducted to perform a cold booting process are described below:

Warm Booting is different from the Cold Booting because it is not performed in the initial phase of starting the device (computer). It also skips the POST test. If your computer hangs due to some reason while working, and requires to be restarted to make it functional. The resetting or restarting of the computer is known as warm booting. It can be performed using the reset button or pressing the particular keys (i.e., Ctrl+Alt+Del) concomitantly. In this type of booting RAM is not tested as there is no Power On Self Test is performed.

In certain cases, warm booting can be harmful to the system and the data due to the forced conducts over the files and the applications for closing them. In other words, triggering a boot when a file and application is open could result in losing the valuable data as one does not get any chance to save the data to the disk before the boot takes place. It can also cause some system issues where the system might halt completely.

We all are aware of these two processes as we perform cold and warm Booting on a daily basis if we are using electronic computing devices. The overall effect of either of the process is to close all the running processes and tasks of an operating system and ultimately closing or resetting the operating system.