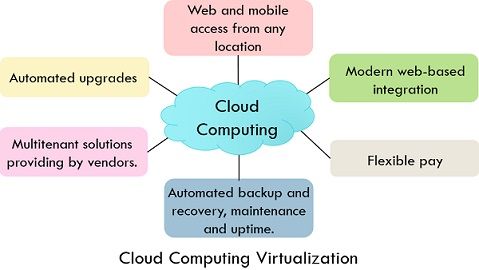 Cloud computing refers to a set of principles and approaches to deliver the application and services that run on a distributed network and accessed by general internet protocol on demand. It can provide limitless virtual computing, network, storage and infrastructure resources, services, platforms and applications.

In a simpler way, Cloud computing comprised of the technology, services and applications that can be delivered over the internet and turns them into a self-service utility.

The term cloud is relevant to the two fundamental concepts. One of which is an abstraction and the second one is virtualization.

Virtualization is the foundation of cloud computing as mentioned above. It is technology which enables the generation of several simulated environments or persistent resources from a solitary physical hardware system. Here the role of hypervisor is crucial, which is directly connected to the hardware to make several virtual machines from it. These virtual machines functioning is distinct, separate and does not interfere with each other.

However, the Virtual machine depends on the hypervisor capability to isolate the resources of the machine from hardware and disseminate them suitably. It assists in the formation of the intellectual abstraction layer.

Virtualization can exist in different classes including server and storage virtualization.

The cloud computing and virtualization are distinguished by the fact that all of the control plane activities that centre around creation, management, and maintenance of the virtual environment, are outsourced to an automated layer that is called as an API and other management servers for the cloud management.

In simple words, the virtualization is a part of cloud computing where manual management is done for interacting with a hypervisor. On the other hand, in cloud computing, the activities are self-managing where an API (Application Program Interface) is used so that the users can self-consume the cloud service.