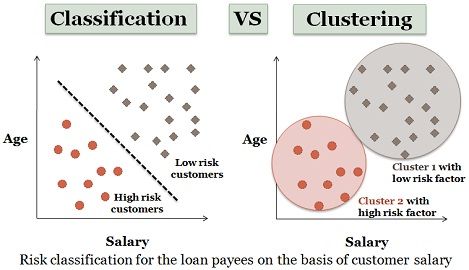 Classification and Clustering are the two types of learning methods which characterize objects into groups by one or more features. These processes appear to be similar, but there is a difference between them in context of data mining. The prior difference between classification and clustering is that classification is used in supervised learning technique where predefined labels are assigned to instances by properties, on the contrary, clustering is used in unsupervised learning where similar instances are grouped, based on their features or properties.

For example, in a banking application, the customer who applies for a loan may be classified as a safe and risky according to his/her age and salary. This type of activity is also called supervised learning. The constructed model can be used to classify new data. The learning step can be accomplished by using already defined training set of data. Each record in the training data is associated with an attribute referred to as a class label, that signifies which class the record belongs to. The produced model could be in the form of a decision tree or in a set of rules.

Clustering is a technique of organising a group of data into classes and clusters where the objects reside inside a cluster will have high similarity and the objects of two clusters would be dissimilar to each other. Here the two clusters can be considered as disjoint. The main target of clustering is to divide the whole data into multiple clusters. Unlike classification process, here the class labels of objects are not known before, and clustering pertains to unsupervised learning.

Another example of clustering, there are two clusters named as mammal and reptile. A mammal cluster includes human, leopards, elephant, etc. On the other hand, reptile cluster includes snakes, lizard, komodo dragon etc. The tools mainly used in cluster analysis are k-mean, k-medoids, density based, hierarchical and several other methods.

Key Differences Between Classification and Clustering

Classification and clustering are the methods used in data mining for analysing the data sets and divide them on the basis of some particular classification rules or the association between objects. Classification categorizes the data with the help of provided training data. On the other hand, clustering uses different similarity measures to categorize the data.