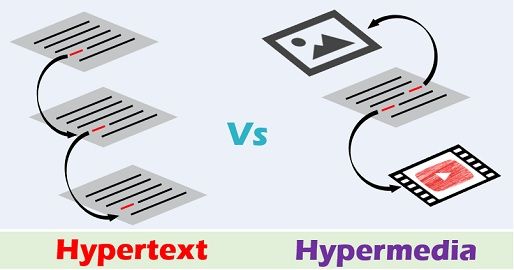 Hypertext and hypermedia, are the techniques for linking non-linear information. The two terms are distinct in a manner that the hypertext allows only text to be hyperlinked while hypermedia could use various multimedia elements such as images, audio and video, in order to link the text and media over the World Wide Web. However, hypertext is a part of the hypermedia as hypermedia includes text, image, audio, video, etcetera.

It all started with the advent of the new techniques to navigate through the websites. A hyperlink is an element of a website by clicking on which we can jump from one page to the other. It is the base of the hypertext and hypermedia.

Hypertext is different from the general text because it is non-linear. In this category of the text, there is no order specified in which the text can be read. It can be compared to the footnotes present in the traditional printed text or even in books too. Hypertext comprised of interlinked pieces of text. The network created by the hypertext structure contains nodes and links, in which a hypertext link acts as the connection medium for the two nodes. Among the two nodes, the first one is known as the anchor node, and the other is called a destination node.

Now, let’s understand what a node is. Each unit of information in a network will be considered as a node, and these nodes are pointing to the other nodes, which is called a link or pointer. This concept is used on websites in which the hypertext written over a webpage contains a hyperlink to the other text in that webpage only or to the other webpage also.

Hypermedia is one step ahead of hypertext as it includes not only text but audio, images, video or any graphics. It is not bounded within the text, which means we can create a link to or over an image and direct it to a video. There are no boundaries for creating a hyperlink, it opens the door for lots of options. It increases the visibility of the document as it contains various graphics rather than just monotonous text.

One the best example of the hypermedia is the youtube in which the text is usually linked to the videos.

Key Differences Between Hypertext and Hypermedia

The crucial difference between the two terminologies is that the hypertext just involves a small part of the text which when clicked redirects the current page to the next page text. Conversely, the hypermedia not only involves text; it could involve various graphics like image, GIF, audio, video. However, it works the same as the hypertext.