Overloading and Overriding are the concepts of Polymorphism. In ‘overloading‘ we redefine a function of a class with the same name but with, different numbers and types of parameters. In the ‘overriding‘  prototype the overridden function is the same throughout the program but, the function to be overridden is preceded by the keyword ‘virtual’ in the base class and is redefined by the derived class without any keyword.

Well, the compiler recognizes depending on the types and numbers of parameters of the called function.

Most commonly overloaded functions are ‘constructors’. ‘Copy constructor’ is a kind of “constructor overloading”.

Implementation of overloading in C++

In the code above, we have a class ‘overload’, and we have overloaded the member function load(). We can clearly distinguish between these overloaded functions in a manner that:

Polymorphism achieved during run-time is ‘overriding.’ We accomplish overriding by using ‘inheritance’ and ‘virtual functions.
We know that every child class inherits all the member functions of its parent class. But what if it needs to redefine some of the functions?

Here the concept of overriding comes into the picture. At first, we have to define a parent class with a member function that we have to override, we refer to this function as an overridden function.

Note: We have to add a virtual keyword to the overridden function.

Next, define a child class and now you can redefine the overridden function. We refer to this redefined function as an overriding function.

Implementation of Overriding in C++

Then we assign the address of object ‘d1’ to pointer ‘p’, again it gives a call to funct(). This time the funct() of derived1 class gets executed.

Finally, we assign the address of object ‘d2’ to pointer ‘p”. Then ‘p’ calls funct() which executes the function funct() of derived2 class.

Note: If the derived1/derived2 class did not redefine funct(), then the funct() of the base class would have been called, as virtual functions are ‘hierarchical.’

Key Differences Between Overloading and Overriding 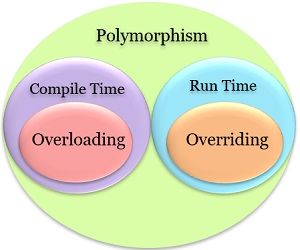 Overloading and overriding appear similar, but this is not the case. Once we overload a function then, any class can not further redefine the overloaded function in future. A virtual function cannot be overloaded; it can only be overridden.